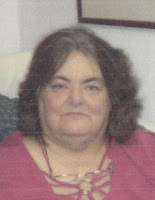 Scio, NY - The Lord was given another wonderful soul when Susan “Suzy Q” (Woodworth) Davenport passed away on Tuesday, August 30, 2016 at Highland Park Healthcare Center in Wellsville following a lengthy battle with MS. She was born May 30, 1948 in Arkport, the daughter of the late Seymour and Julia (Galusha) Woodworth. On October 1, 1966 in Hornell she married William Davenport who predeceased her on June 23, 2015.

Susan attended school in Hornell and was a Sunday school teacher in Howard, NY. The family later moved to Texas where she worked in customer service. She became disabled in 1991 and the family moved to Scio. Susan then became a stay at home mom who loved being with her family. She lived at Highland for the past seven years, where she had a wonderful relationship with everyone she came in contact with. Susan was a fun loving, prankster who was a happy and kind person. She was a proud supporter of St. Jude’s Children’s Hospital, Shriner’s Hospitals, and the MS Foundation.

Friends are invited to call at the J. W. Embser Sons Funeral Home Inc., 17 Schuyler Street in Belmont on Friday, September 2nd from 7:00 to 9:00 pm and on Saturday, September 3rd from 12 noon to 1:00 pm. The funeral will follow the visitation at 1:00 pm with Pastor William Matthews presiding. Burial will be in Forest Hills Cemetery in Belmont. Please consider memorial donations to Allegany ARC, The MS Foundation or the Crosstown Alliance Church. To leave online condolences, please visit embserfuneralhome.com.