Wellsville, NY - William L. Schrader - A “Celebration of Life” with full military honors for William L. Schrader, will be held on Saturday, July 4, 2020 at 1:00 pm at the Allegany County Veterans Organization on the Hunt Road, off County Road 29 “Stone Dam Road” in the Town of Willing.

Bill died on May 10, 2020. To read the complete obituary or leave online condolences, please visit www.embserfuneralhome.com.
Posted by Dick Helms at 3:16 PM No comments: 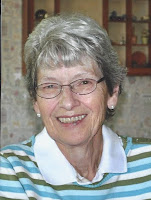 Wellsville, NY - Bette R. Robarts , age 86, of Sunnydale Avenue passed away on Tuesday, June 23, 2020, at home surrounded by her family. She was born on October 28, 1933 in Wellsville to the late Leo and Elsie Cornell Richardson.

Bette graduated from Wellsville Central High School and worked for several attorneys including George Harris, Bill Grastorf, James Euken and Wayne Feeman. She also work for Dr. Harvey Spencer Dentistry and later retired from Air Preheater. Bette spent her time volunteering at the David A. Howe Library and for Meals on Wheels, reading and loved tending to her flower gardens.

She was predeceased by her parents, a sister Barbara Owen and her former husband John Robarts.

Friends are invited to call on Saturday from 12 noon until 2 pm at the J.W. Embser Sons Funeral Home in Wellsville. A funeral service will be held at 2 pm with the Reverend Robert Wheeler presiding. Burial will be in Woodlawn Cemetery and memorials in Bette's name may be made to the David A. Howe Library. To leave online condolences please visit www.embserfuneralhome.com.

Wellsville, NY - Roger J. Gee, 68, of Trapping Brook Road, died peacefully Saturday, June 20, 2020, at Jones Memorial Hospital with his family by his side  He was born November 30, 1951 in Wellsville, the son of the late Douglas J. and Beatrice (Greenan) Gee. On September 11, 1971 in Wellsville he married Deb Bailey who survives.

He was predeceased in addition to his parents, by his father-in-law, Charles Bailey, mother-in-law Margaret Bailey, and two brothers; James and Robert Gee

A lifelong resident of Wellsville, Roger owned and operated Gee’s Repair and Used Cars on the Andover Road for 42 years before retiring in 2018. While he may not always have expressed it, Roger received great satisfaction in being able to help his clients, especially his longtime customers.

Roger was Dale Earnhardt Sr.'s biggest fan, in recent years transitioning his fandom to Kyle Busch and Kyle Busch Motorsports. Throughout his life, he attended several NASCAR races camping with friends and family at numerous tracks. In February, Roger fulfilled a bucket-list item when he attended the Daytona 500.  His love for racing included being a crew member and sponsor for local dirt track racers and close friends Fran Slocum and Mike Wonderling during their racing careers.

A classic car enthusiast that owned several different vehicles throughout his lifetime, Roger’s most prized possession was the 1970 Chevrolet Chevelle he and Deb enjoyed entering into car shows around the northeast. Their love for classic cars led them to becoming founding members of the Custom Express Car Club, which raised hundreds of thousands of dollars for local charities through non-profit shows held at Island Park in Wellsville from 1983 to 2003.

A lifelong Buffalo Bills fan, his rowdy outings with close friends in his younger years gave way to attending games with his son and daughter from the comfort of the Goal Line Club the last few seasons. He was an avid member of the local coffee club squad which met weekday mornings at the Sunoco, breakfast club at the Texas Hot on Saturday mornings and attended Hot Rod Church on Sundays.

Those wishing to make a donation in Roger’s memory can do so to the Wellsville Elks Lodge 1495, Scholarship Fund, where he was a longtime member and regular attendee of the Fantasy NASCAR League, scholarship breakfasts, and enjoyed belting out Neil Diamond’s “Sweet Caroline” alongside other members.

There will be a public “drive by” at Gee's Repair, 3376 Andover Road in Wellsville, on Friday, June 26, 2020, from 1:00 to 3:00 pm. A private graveside service will follow at Woodlawn Cemetery. To leave online condolences, please visit www.embserfuneralhome.com.

Wellsville, NY - Kathryn Cretekos, a long-time resident of Wellsville, passed away Thursday the 18th of June surrounded by her children after a long and wonderful life. She was 91.

Kitty was born on September 10,1928 in Milford, Massachusetts, the daughter of the late Peter and Helen (Costakas) Makris of Providence, R.I. She is preceded by her husband Steven Cretekos. It was October 3, 1948 that their love story began and grew for 60 years. It was at this time Kitty moved to Wellsville and became an integral part of the greater Wellsville community and the strong Greek community within. Kitty helped her husband make Easter and Christmas candy at the Cretekos Store in Wellsville shortly after moving here; this practice continued from their home for many years after selling the business in 1961. In 1958, she began her career in the TV cable industry joining the Rigas brothers in building one of the country’s first cable systems. Her involvement in the growth of this industry continued for the next 50 years. Having survived seven management changes, Kitty would become the first female Regional Manager covering the Central, Finger Lake and Southern Tier regions of New York. She retired from this position in 2001.

She was an avid golfer and spent her summers with friends on the course at the Wellsville Country Club. She was Ladies Club Champion three times, achieved three holes-in-one, and served on the Board of Directors of the club for thirteen years and as secretary for eight. Golfers paired with her in tournaments recognized her for her exceptionally proficient short game.

Kitty was generous in her love for her family and is survived by three children, Stephanie of Leland, N.C., George (Barbara) of Wellsville, and Peter (Mary) of Poughquag, NY. She was YiaYia to her grandchildren, Alexis (Mans) Casteborn of Lund, Sweden, Ellen (Peter) Sulcs of Seattle, WA, and Elizabeth(Dan) Widtfeldt of Dallas, TX. Her great-grandchildren include Axel and Ebba Casteborn and Joanna Widfeldt. Also surviving are many cousins, nieces and nephews; a close circle of friends including Kevin Harris and family, her Tuesday and Thursday night friends in Wellsville, and her Cross Creek community in Fort Myers, FL.

In addition to her husband and parents, Kitty was predeceased by her sister Tina, brothers-in-law Jack, James, Constantine “Gus” Cretekos, sister-in-law Katherine Toporas and her dearest friend Elizabeth Harris.

Because of the unprecedented times in which we live, there will be a graveside service only on at Monday, June 29, 2020 at 11:00 am in Woodlawn Cemetery in Wellsville. A celebration of Kitty’s life will be announced at a later date. Kitty was not only generous in her love but charitable in her heart and would wish any donations be made locally to support the Hart Comfort House, David A. Howe Public Library or Jones Memorial Hospital. To leave online condolences, please visit www.embserfuneralhome.com

Wellsville, NY - James A. Cicirello, 75, of 181 Stevens Street passed away at home on Thursday, June 18, 2020 with his family at his side. He was born October 14, 1944 in Wellsville, the son of the late Anthony Chester and Ruth (Mathern) Cicirello. On April 28, 1973 in Wellsville he married Susan Johnson who survives.

Jim was a 1962 graduate of Wellsville High school. He was first employed by Duff King Electrical Contractor and then Worthington Corporation in Wellsville for four years. He began his career at the Wellsville Police Department in 1970, and retired as Chief of the Department in 2005. He was a former member of the Genesee Hose Company # 5, co-founder of the Allegany County Rescue Squad, and a life-member of the Wellsville Volunteer Ambulance Corps, and Rescue Squad. He was a proud Ham Radio Operator with the call letters KA2AJH, and in 1992 he erected and co-owned the C & S Communications Tower on Alma Hill.

Friends are invited to call on Wednesday, June 24, 2020 from 11:00 am to 2:00 pm at the J. W. Embser Sons Funeral Home Inc. in Wellsville. A memorial service will follow visitation at 2:00 pm with Pastor Dennis Munro presiding. Burial will be in Woodlawn Cemetery. Please consider memorial donations to the Wellsville Volunteer Ambulance Corps Rescue Squad. To leave online condolences, please visit www.embserfuneralhome.com.

Belmont, NY - Helen G. Miess, age 89, of Genesee street passed away on Thursday, June 11, 2020, at the University of Rochester Medical Center in Rochester. She was born in Genesee, Pennsylvania to the late David and Carrie Marble Grover. On November 27, 1949 in Whitesville she married Richard Miess who survives.

Helen was a homemaker was an independent woman who enjoyed reading. She loved her grandchildren and was proud of them.
Surviving besides her husband Richard of 70 years are her three daughters, Leonora ‘Loni” (Thomas) Margeson of Belmont, Corrinne (Scott) Kushner of Liverpool and Noelle (Raymond) DeTine of Belmont; five grandchildren, Thomas Margeson, Adre Ann (Daniel) Barnhardt, Katrina (Erick) Hale, Zachary (Holly) DeTine and Aiden DeTine; five great grandchildren as well as several nieces and nephews.

Helen was predeceased by her parents, a brother Guy Grover and a sister Marjorie Ball.

There will be no prior visitation and a private burial service will take place in Forest Hills Cemetery with Reverend Carol Stewart presiding. Memorials in Helen’s name may be made to the Belmont Free Library and Historical Society, Park Circle, Belmont, NY. 14813. To leave online condolences please visit www.embserfuneralhome.com.

Posted by Dick Helms at 1:56 PM No comments:

Wellsville, NY - Joyce Donovan - A graveside service for Joyce Donovan is planned for Saturday, June 13, 2020 at 11:00 am in Sacred Heart Cemetery in Wellsville. Joyce passed away on April 11, 2020 in Wellsville. To read the complete obituary or to leave condolences, please visit www.embserfuneralhome.com.
Posted by Dick Helms at 4:56 PM No comments:

Bonnie attended Wellsville Central School and graduated from Churchville High School. She resided in Bergen for many years before moving to Wellsville in 2018. She was formerly employed at Tops and enjoyed reading.

Bonnie is survived by a brother, Ronald (June) Freeman of Andover, as well as several nieces and nephews. She was predeceased in addition to her parents, by a brother, Douglas Freeman, and two sisters, Shirley Hamilton, and C. Ruby Anderson.