Posted by Dick Helms at 7:37 PM No comments:

Wellsville, NY - Judith A. Nichols, 67, of 42 Chamberlain Street died Sunday, June 24, 2012 at Jones Memorial Hospital following a long illness. She was born May 25, 1945 in Bradford, PA the daughter of Robert and Thelma (Rodgers) Heffner.

"Judy" was a graduate of Bradford High School and had resided in Coudersport prior to moving to Wellsville in 1989. She was formerly employed at Speers in Bradford and later was a cafeteria employee at Coudersport Central School. She loved to quilt and knit and graciously give her quilts to anyone in need.

She is survived by one daughter, Jescinda Nichols and her fiancé, Tim Howells of Wellsville, three sons, Paul Nichols of Wellsville, Tim Nichols of Auburn and Todd Nichols of Albion, PA, three grandchildren, Shane Doan, Heather Howells and Dominica Howells, one sister, Arleene Shick of Bradford, P A and several nieces & nephews.

Friends are invited to call on Thursday, June 28, 2012 from 4:00 to 7:00 pm at the J. W. Embser Sons Funeral Home Inc. in Wellsville. The funeral will follow visitation at 7:00 pm in the funeral home with her sister, Arleene Shick presiding.

Memorial donations may be made to the Wellsville Volunteer Ambulance Corps. To leave online condolences, please visit www.embserfuneralhome.com.
Posted by Dick Helms at 4:29 PM No comments: 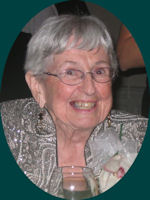 Wellsville, NY - Phyllis Potter Burrows, 91, died peacefully at St. Luke's Health Facility in Oswego, N.Y. on June 24, 2012 after a long illness.  Phyllis was born in Houlton, Maine on January 10, 1921 to Dr. John G. and Evelyn Haskell Potter.  She attended Ricker High School and Colby College in Maine.  She moved to Andover and then Wellsville in 1944 where she met and married John A. Burrows on June 25, 1945.

She worked many years as a legal secretary in Wellsville, most recently for Cummings, Embser and Woltag..  Phyllis was as avid golfer and was a member of the Wellsville Country Club for 60 years. She was a member of the United Church of Christ in Wellsville and served as secretary to Rev. Russell J. Clair.  Phyllis travelled extensively, often with her dear friend Harriett Bradley.  She was a voracious reader all her life.  She wintered in Cocoa Beach, Fl. for over 20 years before moving to Oswego in June 2011.

Calling hours are Thursday, June 28, 2012 from 3:00 until 7:00 at Embser Funeral Home in Wellsville. The service will be held at The First Congregational Church (UCC) in Wellsville on Friday, June 29, 2012 at 11:00 a.m., Pastor Andrew Hinman presiding. A graveside ceremony at Woodlawn Cemetery will follow.

In lieu of flowers, donations may be made to the David A. Howe Library in Phyllis's memory. To leave online condolences, please visit www.embserfuneralhome.com.
Posted by Dick Helms at 4:23 PM No comments: 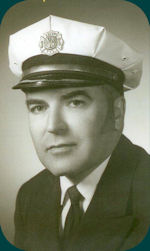 Wellsville, NY - Joseph R. Anderson, 85, of 29 Crescent Drive died Monday, June 11, 2012 at Jones Memorial Hospital following a brief illness. He was born at home September 21, 1926 at 80 Dyke Street in Wellsville the son of the late Leo P. and Mary (Shine) Anderson. On June 3, 1950 in Friendship he married Marjorie Hewitt who survives.

He was a graduate on the Immaculate Conception School and Wellsville High School class of 1944. He was a veteran of WW II serving with the U. S. Navy aboard the USS Oyster Bay from December 19, 1944 to August 15, 1946. He was employed as a cable splicer for 39 years with New York Telephone, retiring in 1988. He was an active member of the Dyke Street Engine Company # 2 for 60 years, where he served as President and Captain. He was the Fire Chief of the Wellsville Volunteer Fire Department from 1973 to 1975, Past President of the Allegany County Fireman's Association and Past President of the Southwestern Fireman's Association. He was a member of Telephone Pioneers, the American Legion post 702, the VFW Post 2530 and the Wellsville Country Club.

While serving as 1st Assistant Fire Chief, during the Flood of 72, he helped rescue several people by boat and personally witnessed the wing of Jones Memorial Hospital fall into the Genesee River. He enjoyed woodworking, hunting, golfing and was an avid Yankees fan. In 1962 he built his own house with the help of this cousin, Virgil Goodridge.

Friends are invited to call on Friday, June 15, 2012 from 2:00 to 4:00 and 7:00 to 9:00 pm and Saturday from 10:00 to 10:30 am at the J. W. Embser Sons Funeral Home Inc. in Wellsville. A Mass of Christian Burial will be celebrated on Saturday at 11:00 am at the Immaculate Conception Church in Wellsville with Rev. Sean DiMaria as Celebrant. Burial, with military honors will be in Sacred Heart Cemetery. Memorial donations can be made to the Dyke Street Engine Company, Hart Comfort House or the Immaculate Conception School. To leave online condolences, please visit www.embserfuneralhome.com.

John was a lifelong resident of Wellsville and graduated from Wellsville High School in 1952.He was employed as a truck driver for Joyce Western Pipeline of Andover and later Otis Eastern Service of Wellsville retiring in 1995.He was a past member of the Willing Fire Department and was a member of the Teamster Union.  John is survived by a son Stephen of Hornell.

Friends are invited to attend a funeral service on Thursday, June 14, 2012, at 7 pm at the J. W. Embser Sons Funeral Home in Wellsville with Pastor Rich Bendelewski. Burial will take place in Hallsport Union Cemetery and memorials may be made to either the Hallsport Christian Church, 2182 Stout Road, Wellsville, New York or to the Wellsville Volunteer Ambulance Corps. To leave online condolences please visit www.embserfuneralhome.com.
Posted by Dick Helms at 6:42 PM No comments:

Friendship, NY - Daniel E. Webster of Depot Street passed away on Tuesday, June 5, 2012, at the Olean General Hospital. He was born on May 22, 1957 in Cuba. He was the son of Donald and Anna Mae (Coyle) Webster and he was married to Donna Strong.

Daniel was a US Navy Veteran. He was a truck driver and had worked for General Roofing and Rochester Ceiling Company. Daniel liked to hunt, fish and camp. He also liked to watch NASCAR and was a Dale Earnhardt Senior and Junior fan.

Friends are invited to call on Friday from 10 am to 11 am at the J. W. Embser Sons Funeral Home in Wellsville. His funeral service will be held at 11 am in the funeral home with Rev. Carl Kemp presiding. Burial will be in Knights Creek Cemetery and memorials may be made to the donor's choice. To leave on line condolences please visit www.embserfuneralhome.com.
Posted by Dick Helms at 7:22 PM 1 comment:

Friends are invited to call on Friday, June 8, 2012 from 2:00 to 3:00 pm at the J. W. Embser Sons Funeral Home Inc. in Wellsville. The funeral will follow at 3:00 pm in the funeral home with Rev. Robin George presiding. Burial will be in Woodlawn Cemetery. Memorial donations can be made to the Ronald McDonald House, 333 Westmoreland Drive, Rochester, NY 14620. To leave online condolences, please visit www.embserfuneralhome.com.
Posted by Dick Helms at 2:16 PM No comments: