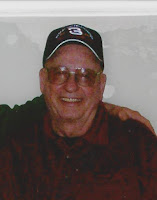 Allentown, NY - Howard E. Slocum Sr. “Iron Man”, age 86, of the Hog Brook Road passed away on Friday, October 7, 2016 at the University Of Rochester Medical Center. He was born October 29, 1929 in Scio to Carl and Esther Burton Slocum. On August 19, 1946 in Bolivar he married the love of his life Elizabeth Burgess who predeceased him on October 27, 2010.

Howard was a long time resident of the Allentown Area who started working for Air Preheater in 1951 and retired this year after 65 years of service. He was an avid stock car fan who raced the dirt track circuit for over 30 years. Howard was a devoted family man who was hard working, humble, honest, and a role model to everyone. He loved life and was beloved opening his home and his heart to anyone in need without seeking recognition. Howard enjoyed the out of doors and especially going to ham and leek dinners. One of his favorite quips was “I was born when the best ships were wooden but the men were iron men”

Friends are invited to call on Friday, October 21, 2016, from 1 to 4 pm at the J.W.Embser Sons Funeral Home in Wellsville. Burial will take place in Stannards Cemetery and in lieu of flowers please consider memorial contributions to the S.P.C.A. of to the charity of the donor’s choice. To leave on line condolences please visit www.embserfuneralhome.com.

Don graduated from Wellsville High School in 1946.  After graduation he served in the U.S. Army until 1949.  He was stationed in Fort Bliss, assigned to Battery B, First Guided Missile Regiment where he was selected to work on the Von Braun team to develop the guidance system (gyro) for the V2 Rocket that subsequently became part of the NASA Space Program.  Don also served as a military escort for service personnel that were killed in WWII when their remains were repatriated to the United States.  Following his service, Don was a Senior Development Engineer at Eastman Kodak and then hired as an Engineering Section Leader at General Dynamics in Rochester.
Along with his wife Norma, Don was owner and operator of Mallery Television for over 40 years.

The community of faith was a driving force in his life.  He was a member of the Christian Temple Church in Wellsville where he served as a deacon, elder, and an interim speaker.  He also wrote and acted in The Players, a church drama group.

Don volunteered in the local community including delivering meals on wheels, assisting others through a volunteer driver program, and initiating the first volunteer glass recycling program.
He was an avid golfer, fisherman, and at a young age became a die-hard NY Yankees fan.

Don was predeceased by his parents, his wife Norma, his daughter Leslie Thomas, a brother Andrew, and six sisters, Marie, Marion, Elva, Arla, Florence and Helen.

Calling hours will be held on Saturday, November 12, 2016 at 1:00 p.m. at the Christian Temple Church in Wellsville, New York; a Celebration of Life will follow at 2:00 p.m.
In lieu of flowers, donations can be made to the Leslie Newland Thomas Memorial Scholarship Fund, % Wellsville High School, 126 West State Street, New York, 14895. To leave online condolences please visit www.embserfuneralhome.com

Posted by Dick Helms at 1:53 PM No comments:

Wellsville, NY - Jeffrey Charles Densmore, age 36, of Florida Avenue passed away unexpectedly on Tuesday, October 4, 2016. He was born on February 12, 1980 in Wellsville to Charles and Sherry Cole Densmore who survive him.

Jeff was a lifelong resident of Wellsville who graduated from Wellsville High School and obtained a welding certificate from the Alfred State College Vocational School. He was a welder by trade who had worked for Alstom in Wellsville and for several other manufacturing companies. Jeff was a Yankees Fan who enjoyed sports, especially football, basketball and baseball. He will be remembered as a hardworking man and father.

Friends are invited to call on Friday, October 7, 2016, at the J.W. Embser Sons Funeral Home in Wellsville from 12noon to 2pm. The funeral service will be held at the conclusion of the calling hours at 2 pm with burial will follow in the Hallsport Union Cemetery. Memorial contributions can be made to either the Wellsville Little League or to the Allegany County SPCA. To leave online condolences please visit www.embserfuneralhome.com.

Allentown, NY - Gertrude Edith Palmer Peaslee, age 98, a longtime resident of Allentown passed away on Monday October 3, 2016 at the Wellsville Manor Hills. She was the daughter of the late Harold and Eva Marjorie Barth Hunt.

She was predeceased by her first husband, Edwin Palmer, and her second husband, Raymond Peaslee. She was also predeceased by 3 sisters, Betty, Geraldine and Helen; and a brother, Harold.

She is survived by her only child, Howard Palmer (Jean) of California; 2 grandsons, James (Lisa) and Richard (Lisa); 4 great grandchildren, Jarrod, Allison, Nathan, and Ryan; her sister Corrine Mathern of Wellsville.

Gert will be remembered by many as the smiling, cheerful proprietor of Palmer’s General Store in Allentown which see ran for more than 40 years.

Honoring her wishes, there will be no calling hours. A private family service is planned. A celebration of her life will held at a later date. Remembrance donations may be made to the Allentown Methodist Church or the Allentown Fire Department. To leave online condolences please visit www.embserfuneralhome.com.