Jay was a 1979 graduate of Wellsville High School and had resided in Wellsville and Bolivar before moving to Ulysses. He was formerly employed at a variety of construction companies in the area and later for Air-Preheater Company in Wellsville for many years. He then became an over the road truck driver for Jaylor Trucking of Belfast; a job the he enjoyed very much. He was an outdoorsman who loved to fish and hunt. He also enjoyed gardening and teaching the local grandchildren to cook.

Friends are invited to call on Monday, October 1, 2012 from 7:00 to 9:00 pm and Tuesday from 11:00 am to 12:00 noon at the J. W. Embser Sons Funeral Home Inc. in Wellsville. A memorial service will follow visitation at 12:00 noon on Tuesday in the funeral home with Rev. Ralph Eastlack presiding. Burial will be in Woodlawn Cemetery. Memorial donations may be made to the American Heart Association or the American Diabetes Association. To leave online condolences, please visit www.embserfuneralhome.com.
Posted by Dick Helms at 1:57 PM 2 comments: 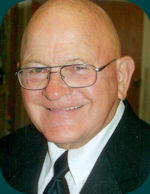 Kato was a 1954 graduate of Wellsville High School. He served in the U.S. Army with the 7th Infantry Division from 1955 to 1958. He was employed as a mechanical engineer for Dresser-Rand Corporation in Wellsville for 39 years, retiring in 1996. He also operated Kato's Katering and provided private and charitable catering for many years. He was an active member of the First Trinity Evangelical Lutheran Church in Wellsville and was voted "Gabby Hayes look-alike" at "Gabby Hayes Days" in Downtown Wellsville for many years. He also was the "right hand man" for the Scio Marching Band for many years. He loved God, Family and his many friends and enjoyed hunting, hospitality and farm life.

Friends are invited to call on Wednesday from 2:00 to 4:30 pm and 7:00 to 9:00 pm at the First Trinity Lutheran Church, 470 N. Main Street in Wellsville. The funeral will be Thursday, September 27, 2012 at 3:00 pm in the church with Rev. Robert Morris presiding. Memorial donations may be made to the Trinity Lutheran Church, Habitat for Humanity, Hart Comfort House or the SPCA Serving Allegany County. To leave online condolences, please visit www.embserfuneralhome.com 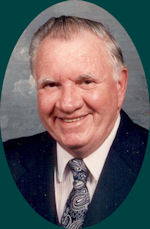 Corky was a 1953 graduate of Bolivar Central School. He was a veteran of the U. S. Army serving as an overseas radio operator from 1956 to 1958. He was a long time resident of  Bolivar, where he was a life member of the Bolivar Volunteer Fire Department, a member of the Volunteer Ambulance Squad and the Fire Police. He was a former member of the Bolivar American Legion and the Wellsville VFW. He enjoyed coin collecting, playing golf, bowling and going to the casino. He was employed at Macler Industries Inc. in Friendship beginning 1958 and was a Production Supervisor when the plant closed in 1987. He later worked for a foundry in Ohio and ended his career at the Gray Syracuse Company in Chenango, NY, retiring in 1999. He had earned certificates from Alfred University and Ohio University for labor management and fluorescent penetrant inspection and process control.

He is survived by three daughters, Diane (Dennis) Wight of Albion, Robyn (David) Griswold of Bolivar and Tina Wheeler of Wellsville, three step daughters, Kay (Jesse) Grossman of Lyndonville, Barbara (Jar) Kilfoyle of Fillmore and Hope Jefferies of North Carolina, 20 grandchildren, 17 great grandchildren and several nieces & nephews. He was predeceased by a brother, James Wheeler in 1998.

Friends are invited to call on Monday, September 24, 2012 from 11:00 am to 1:00 pm at the J. W. Embser Sons Funeral Home Inc. in Wellsville. The funeral will follow at 1:00 pm in the funeral home with his nephew, Rev. Thomas Cline presiding. Memorial donations may be made to Home Care & Hospice, 118 N. Main Street, Wellsville, NY 14895. To leave online condolences, please visit www.embserfuneralhome.com.
Posted by Dick Helms at 5:17 PM No comments:

Scio, NY - Carol K. "Kato" Aldrich, 76, of 4557 Charles Street died Thursday, September 20, 2012 shortly after arrival at St. Mary's Hospital in Tucson, Arizona. Arrangements, under the direction of the J. W. Embser Sons Funeral Home Inc. in Wellsville are incomplete and will be published in a later edition.

Carl was a veteran of the U. S. Army. He was employed as a machinist at Dresser-Rand Corporation in Wellsville. He was a member the Herbert Delong American Legion Post 808 in Belmont and the Southern Tier Snow Riders of Almond.

Friends are invited to call on Friday from 2:00 to 4:00 and 7:00 to 9:00 and Saturday from 11:00 to 1:00 pm at the J. W. Embser Sons Funeral Home Inc. in Belmont. Burial will be in Forest Hills Cemetery in Belmont. Memorial donations can be made to the American Cancer Society or the Amity Rescue Squad. To leave online condolences, please visit www.embserfuneralhome.com.
Posted by Dick Helms at 6:48 PM No comments:

West Belvidere, NY - Karan J. "Ma" Peasley passed away on Monday, September 17, 2012 shortly after her arrival at Jones Memorial Hospital. Born on August 2, 1953 born to Todd H. and Carol Gates Peasley, in Spokane, WA. she spent her childhood years living and working at the family business in Hinsdale, NY until moving to Olean. She graduated from Olean High School in1971 and continued her formal education at Alfred State College, graduating in 1974 from the Medical Records program.

Her career in medical records began as a transcriptionist at St. James in Hornell and Jones Memorial in Wellsville. She went west for a period of time and speant a year exploring southern Arizona in the 1970's before settling down to become a wife and mother. She married Phillip Robins in 1975 (who predeceased her in 1991) and they were blessed with two children Kristofer 1979 and Kara in 1981. Karan worked for the Rochester Psychiatric Center in the late 1970's/early 1980's and was instrumental in the formation of the frst on-site Day Care Center in Monroe County. She relocated to Flagstaff, AZ for a period of time in the late 1980's furthering her career by becoming the Director of Medical Records at the Flagstaff Medical Center. The challenges of being a single mother never hampered her upbeat personality and sense of right and wrong. She moved her small brood back to New York in 1991 where she reconnected with her family and realized her professional dream by becoming the Director of Medical Records at Jones Memorial Hospital (Wellsville) until her retirement in 2004.

Karan had a quirky sense of humor and used it in her struggles through this life on Earth. She was very dedicated to her large circle of friends that she'd accumulated over the years. She was a life member of the Belmont Volunteer Fire Department Auxiliary and volunteered much of her time advocating for the Southwestern Association of Volunteer Fireman. Karan was passionate about antiques. She loved auctions and yard sales and relished the idea of getting a "good deal". She loved following politics and made herself crazy following politics. She described herself as a very opinionated citizen and always said "that you can't complain if you don't vote." She held so much wisdom and was a mentor to the youth of the area. She "adopted" many kids and her home was always open to anyone in need.

She is survived by her husband, Lane Baggett, her daughter, Kara Janice Robins of Rochester, two sisters, Lori A. Crawford of Jonestown, PA and Sharon K. Bennett of Hinsdale, a brother, Dennis Peasley of Olean, several nieces, one nephew, and a multitude of friends and extended family. She will also be missed by "the guys" her many feline friends. She was predeceased by her son, Kristofer Robins in 2000, and parents Todd H. 1988 and Carol in 1995.

Friends and family are invited to a memorial service and celebration of Karan's life on Saturday, September 22, 2012 at 2:00 pm in the side yard of her home, 5968 County Route 20W, West Belvidere. Memorial donations in lieu of flowers can be made to the Belmont Volunteer Fire Department or the Amity Rescue Squad. To leave online condolences, please visit www.embserfuneralhome.com.

Wellsville, NY - John Francis Biedakiewicz, 63, died Wednesday, September 12, 2012 at the Hart Comfort House. He was born in East Chicago, IN the son of John and Jane (Witczak) Biedakiewicz. On April 17, 1982 in Highland, IN, he married Rada Boljevic who survives.

John was employed at Combustion Engineering in East Chicago, IN and Air Preheater Company in Wellsville for 35 years. He served in variety of positions and ended his career as a project manager. He was a member and past president of the Wellsville Rod & Gun Club for several years and was a proficient trap, skeet and sporting clays shooter. He raced in motocross, played tennis and golf and was a scuba diver. He enjoyed hunting, fishing and boating; especially with his sons. He was an avid baseball and football fan, a Civil War buff, a supporter of Wellsville Lions Basketball and enjoyed going to the Little League World Series. He could fabricate and repair about anything and was a member of the Immaculate Conception Church.

Besides all these wonderful accomplishments and traits, John was also just a genuinely good man. He loved to share his vast array of knowledge with anyone who was interested. This being said he taught his sons so much, such as how to take down trees, swing a golf club, and use a clutch. But the single most important thing he had taught them was how to be gentlemen. He showed them the importance of chivalry, helping others out whenever possible, and the simple but strong impression of saying "please" and "thank you". They were incredibly blessed to have a father like John, and proud (to say the least) to have him as their father. He will be forever loved, and always missed. We like to think he's where the fish are always biting, the greens are always cut, and the sun is always shining. He will never be forgotten.

Friends are invited to call on Sunday, September 16, 2012 from 2:00to 4:00 and 7:00 to 9:00 pm at the J. W. Embser Sons Funeral Home Inc. in Wellsville. Services will begin Monday at 11:00 am with a prayer in the funeral home. A Mass of Christian Burial will be celebrated Monday at 11:30 am at the Immaculate Conception Church in Wellsville with Rev. Sean DiMaria as celebrant. Burial will be in Sacred Heart Cemetery. In lieu of flowers, memorial donations can be made to the Jones Memorial Hospital Comfort Room, the Hart Comfort House or the American Cancer Society. To leave online condolences, please visit www.embserfuneralhome.com.
Posted by Dick Helms at 6:11 PM 3 comments: