Bolivar, NY – Shawn Michael Chase, 43, previously of Belmont, died at home unexpectedly of a heart attack due to complications of diabetes on Monday, January 2, 2023. He was born in Cuba on June 7, 1979 the son of David L. and Diana M. (Kazanjian) Chase.

Shawn attended Genesee Valley School and the Belmont BOCES. He worked for his mother’s Daycare services in Belmont, and loved being around the children. He was a volunteer firefighter until his health wouldn’t allow him to continue. Most of all, his passion was music, if he had to be indoors he needed it to be focused on music (or fighting with the cats). He worked as a DJ, was a member of several bands including Those Guys, Overgrown, and Erudition. He owned and operated his own recording studio helping several other local musicians record and produce their music. With Those Guys he toured across the United States, playing in several music festivals. He started with the local Pork Stock Festivals, and his love grew from there. When he didn’t have to be inside, he only ever wanted to be outdoors (where he preferred to be), he loved camping (having camped across the country), hunting, fishing, and was a generally well rounded outdoorsman. 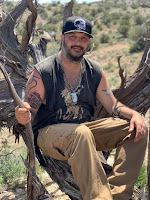