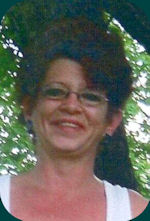 Wellsville, NY - Dawn Michelle Hall-Layman, 48, of 3784 Weinhauer Hill Road died unexpectedly on Saturday, October 27, 2012 at home. She was born April 9, 1964 in Toms River, NJ the daughter of Howard and Martha (Jackson) Hall. On July 13, 2002 in Wellsville she married Robert Layman who survives.

She was formerly employed at the Modern Diner and was currently employed as a cook and waitress at Castaways. She was an avid singer and enjoyed "Open Mic Night" at the VFW. She also enjoyed canning, cooking and spending time with family and friends.

Surviving in addition to her husband is her mother, Martha Hall of Loris, SC, one son, John Johnson of Wellsville, three daughters, Amelia (Jason) Workman of Andover, Crystal Johnson of Andover and Renee Layman of Wellsville, five grandchildren, Destiny, Naudia, Zander, Mylah and Aliza, one brother, Christopher Hall of Wellsville, four sisters, Sasha Montbelle of Andover, Yvonne (Dave) Volkmar of Arcadia, FL, Cathy (Jim) Royer of Loris, SC and Julie (Bryan) Holtz of North Dakota, as well as several nieces, nephews and friends. She was predeceased by her father, Howard Hall.
Friends are invited to call Friday, (November 2, 2012) from 2:00 to 4:00 and 7:00 to 9:00 pm at the J. W. Embser Sons Funeral Home Inc. in Wellsville. The funeral will be Saturday at 11:00 am in the funeral home with Pastor Frank Troutman presiding. Memorial donations can be made in memory of Dawn Hall-Layman % Community Bank, 113 N. Main Street Wellsville, NY 14895. To leave online condolences, please visit www.embserfuneralhome.com.
Posted by Dick Helms at 10:50 AM