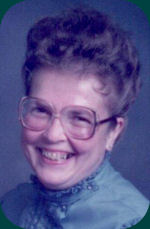 Wellsville, NY - Dolores M. Goetschius, 79, of 3471 North Drive in Riverview Heights died on Thursday, October 11, 2012 surrounded by her family and friends. She was delivered by her grandma on April 12, 1933 at the home of her grandma and grandpa Graves in Graves Town, NY. She was the daughter of the late Francis and Mary (Graves) Joyce. On July 3, 1954 in Wellsville she married William K. Goetschius who survives.

Dolores had many fond memories of her childhood. When she was five years old, her dad walked her everyday to the county school on top of Meservey Hill; her teacher was Florence Harder Carpenter. She attended there for two years before attending the Fords Brook School and later the Immaculate Conception School in Wellsville. She was a 1951graduate of Wellsville High School where she met her husband in the ninth grade and as he sat behind her, he tied the large bow of her pink dress to her to her chair! She ended up marrying him anyway, four years later. She also recalls that her dad gave her a cow, that she named Maudine, which she dearly loved. She was employed at a licensed teacher's assistant at Wellsville Elementary School and she loved each and every child in her classroom. She was a member of the Immaculate Conception Church. She had a beautiful life and was loved by her family and many friends.

Friends are invited to call on Sunday, October 14, 2012 from 2:00 to 4:00 and 7:00 to 9:00 pm and Monday from 10:00 to 10:30 am at the J. W. Embser Sons Funeral Home Inc. in Wellsville. A Mass of Christian Burial will be celebrated on Monday at 11:00 am at the Immaculate Conception Church in Wellsville with Rev. Thomas Roman as Celebrant. Burial will be in Stannards Cemetery. The family suggests memorial donations be made to the SPCA Serving Allegany County. To leave online condolences, please visit www.embserfuneralhome.com.
Posted by Dick Helms at 4:36 PM