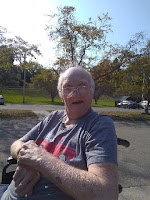 Ed was a long time resident of Belmont who attended Wellsville Central Schools. He served honorably in the US Navy from 1951 until 1955. Afterwords he was employed by C.E. Air prheater where he retired from after 30 years. He was a long time active member of the First Baptist Church of Belmont where he served as a Deacon and rang the church bell. He loved to fish,especially fly fishing, and was a former member of the Amity Rescue Squad. Ed loved spending time with his family, reminiscing and telling stories.

Ed was predeceased by his parents; his wife Mary Helen; 3 brothers, Terry, Donny, and Bill; a sister, Nancy Kiefer.

Friends are invited to call on Thursday, November 5, 2020 from 2-4 pm at the J.W. Embser Sons Funeral Home in Belmont. Ed's funeral service will be a private family service at the First Baptist Church of Belmont with Pastor Duane Broadwell presiding. His burial with full military honors will be held in Forest Hills Cemetery of Belmont. Memorials in Ed's name may be made to the First Baptist Church of Belmont. To leave online condolences please visit www.embserfuneralhome.com.