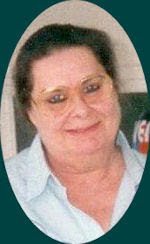 Belfast, NY - Alice P. Brownell, 70, a former resident of 15 ½ Main Street died on Saturday, June 19, 2010 at the Wellsville Manor Care Center with her family at her side. She was born March 23, 1940 in Wellsville the daughter of the late Clarence E. and Helen Pearl (Haskins) Armstrong.

Alice was employed as a waitress at the Texas Hot and the Cross Diner in Wellsville, Ernida's in Andover and the Belfast Hotel. Alice enjoyed being a waitress and getting to know her regular customers. The highlight of Alice's career was in the early 60's while working at a diner in Rochester, she served two actors; Richard Chamberlain from the "Dr. Kildare" show and Vince Edwards from the "Dr. Ben Casey" show. She always treasured the autographed photos she received. She was a member of the American Legion Auxiliary in Belfast and enjoyed scratch off tickets.

Friends are invited to call on Thursday from 2:00 to 4:00 and 7:00 to 9:00 pm. at the J. W. Embser Sons Funeral Home Inc. in Wellsville. The funeral will be Friday, June 25, 2010 at 11:00 am in the funeral home with Pastor Dick Helms presiding. Burial will be in Riverside Cemetery in Belfast. Memorial donations are suggested to the American Lung Association or HomeCare & Hospice. To leave online condolences please visit www.embserfuneralhome.com.
Posted by Dick Helms at 4:12 PM