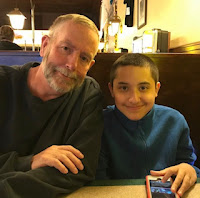 Wellsville, NY - It took a long time – more than 18 years, in fact – but cancer finally got the best of Daniel T. “Dan” Martelle, who died October 18 at the Hart Comfort House in Wellsville, N.Y., surrounded by his family. He was 62.

It's hard to briefly summarize such a full life. Dan, who was born in Scarborough, Me., and relocated with his family to Wellsville in 1965, was for decades a fixture among Wellsville’s brigades of first responders. He began with the Wellsville Volunteer Ambulance Corps at age 16 and remained involved with volunteer services until 2018.

Among his roles: President and first assistant rescue chief of the WVAC, member of the Genesee Hose Company/Wellsville Fire Company, trainer of emergency responders in rescue, and more recently a trainer for police departments in how to handle encounters with autistic people and others who may not be able to respond to their questions. He was joined in many of those volunteer efforts by his wife Karen (Curtis), making them a potent combination of selfless help to others. Dan also served a term on the Wellsville Central School District board of education and was a former member of the village zoning board.

But Dan’s most enjoyable volunteer role was as co-founder and CEO of Race Services Inc., which provided the rescue team and other volunteers at the Watkins Glen International race track, where he, Karen and a shifting posse of relatives and friends spent nearly every summer weekend camping at night – bonfire, anyone? – and directing all emergency services for race teams and fans during the day. Dan also traveled around the country to work as a firefighter/medic on Rescue 91 with the Sports Car Club of America’s pro series.

Of course, the nature of volunteer work means those passions went unpaid, at least in dollars, so Dan made his living through a series of jobs including a stint as a Wellsville village police officer, running his own business inspecting and charging fire extinguishers, working with his father, Mickey Martelle, at the family’s Right Now Printing on Wellsville’s Main Street, and, since 1993, as a cell-site technician, most recently for AT&T, a job that had him scrambling across hillsides in all manner of weather to keep cell towers alive.

But it was volunteer work that invigorated Dan, a manifestation of his defining spirit of generosity. A case in point: When he and Karen took guardianship of their autistic grandson, Ryan, they converted their backyard into a playscape which they made available to other families with special needs children.

In fact, Dan and Ryan developed an unusually deep bond despite the generational, and communications, divide, and in many ways each helped the other expand their worlds.

Over the years, Dan assembled an extensive collection of tools in the workshop he built in the family’s backyard, and readily granted access to friends and neighbors who happened to have a little project that needed a router or a belt sander or a small drill press. He and Karen also hosted regular barbecues and informal gatherings around their backyard fire pit through which they fed and entertained a revolving group of family, neighbors and friends.

It was around the firepit, in fact, where firepit buff J.R. Rummel (Dan’s doctor, neighbor and fellow woodworker) teamed up with Dan to create the Martelle Marshmallow Institute, an uncredentialled school of lesser learning designed to craft exotic, and occasionally, high-octane S’mores.

Dan for a time also was a semi-avid deer hunter, venturing out in the woods each fall with Mickey and his friends. But Dan and Mick were more interested in the camaraderie than in the hunting. In fact, Dan only dropped one deer during all those excursions – a small buck that ran right at him.

“I shot it in self-defense,” he said.

Over time, Dan and Mickey realized their favorite part of the outings was lunch afterward, so they dropped the hunting and just went to lunch. They reached the same conclusion about golf, eventually skipping the nature walks in search of lost balls to proceed directly to beef on weck.

Dan enjoyed a wide circle of friends, including – in addition to the Rummel family – Jim, Susan, Scott and Jamie Cicirello; Sylvia Masin, Tom Kristoffersen and family, and far too many others to list.

Dan is survived by his wife, Karen, whom he married August 20, 1976, and their children Becky of Horseheads, and Katie and Chris (Jeana) of Wellsville; grandchildren Ryan, Matthew, Tripp and Harlee, all of Wellsville; his mother, Dorothy Martelle of Wellsville; siblings Scott (Margaret) of Irvine, Ca., Lisa (Joe Harvey) of Pasadena, Md., Craig (Tammy) of Conestoga, Pa., and Jen (Steve) Heicklin of Medford Lakes, N.J.; sister-in-law Carol Howard of Virginia and Chuck (Joan) of Perkiomenville, Pa.; and a small village of nieces, nephews, and extended family in Maine.

Visiting hours will be from 6-9 p.m. Friday (Oct. 25) at the J. W. Embser Sons Funeral Home at 34 West State Street, Wellsville. The funeral will begin with visiting hours from 11 a.m.-noon Saturday (Oct. 26) at The Presbyterian Church of Wellsville, 68 North Main Street, followed by a memorial service at noon and then a reception. In lieu of flowers, the family requests donations be made to the Wilmot Cancer Center in Rochester, the Hart Comfort House in Wellsville, the Allegany Arc, or to an organization of the donor’s choice. To leave online condolences please visit www.embserfuneralhome.com.