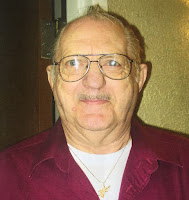 Bob was raised in Shinglehouse, PA and Andover. He was a veteran of the U.S. Army serving from 1955 to 1960. He began his career at Baldwin's Lumber Products throughout the 1960's, Seismograph Surveying Company during the 1970's, and later for Rochester Plastics in Wellsville. He enjoyed hunting, fishing, horseshoes, Euchre, and was a member of the Frank B. Church Post 2530 VFW in Wellsville.

He is survived by his wife, Lois Eck of Kuttawa, KY, two daughters, Cindy (Rick) Rouse of Wellsville, and Cheryl Eck of Pike, two sons, Robert (Jaymie) Eck of Tonawanda, and Sean (Amanda) Eck of Elmira, 14 grandchildren, 19 great grandchildren, two great-great-grandchildren, a stepbrother, Dick Allen of Phoenix, AZ, a stepsister, Lola Cline of Wellsville, a half brother, Clyde Eck of Whitesville, as well as several nieces, nephews, and cousins. In addition to his parents, he was predeceased by a son, Terry Eck, two sisters, Lillian Allen, and Shirley Cox, a brother Gordon Eck, and a half-brother Cliff Eck.
Friends are invited to a graveside service on Friday, August 10, 2018 at 1:00 pm in Forest Hills Cemetery, Belmont, NY. Please consider memorial donations to the Manor Hills Activity Center, 4192B Bolivar Road, Wellsville, NY 14895. To leave online condolences, please visit www.embserfuneralhome.com.