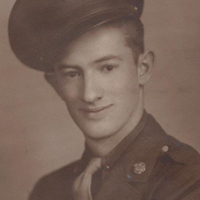 Roy was a veteran of WW II serving with the U. S. Army in the European Theater of Operation.
In 1953 he started working on an oil rig for Vince Helmhold. He later started his career as a deliveryman with Elmhurst Dairy, until his retirement. During retirement he worked as a caretaker for Shaner Development Corporation and for the Wellsville Rod & Gun Club. He was a life member of the Genesee Hose Company #5 and a member of the Morrison Hayes Post 702 American Legion. He loved his canine companion, Pepper, and enjoyed hunting, fishing, his years with the fire department and his daily trips to McDonalds with his grandson.

Friends are invited to attend a memorial service on Saturday, May 21st at 11:00 am at the J. W. Embser Sons Funeral Home Inc. in Wellsville. Burial, with military honors will follow at  Stannards Cemetery. Please consider donations to the Genesee Hose Company # 5, the American Legion or any charity of the donor’s choice. To leave online condolences, please visit www.embserfuneralhome.com.
Posted by Dick Helms at 9:40 AM