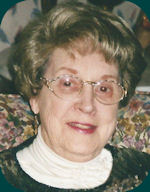 Born October 27, 1921, in Bolivar, New York, she was the daughter of Myron H. and Pearl M. Hurd.   A lifelong resident of Wellsville, New York, she graduated from Wellsville High School in 1939.

A local historian and enthusiast of the Town of Wellsville, she actively researched the Hurd family genealogy and their contributions to the development of the town.  She was an avid reader and enjoyed a myriad of interests in local western New York arts and crafts, including becoming a published authority on Glidden pottery.  She especially loved all kinds of Teddy bears.  As a teen she had worked at Stacy's Ice Cream Parlor and still had her original ice cream scoop some 75 years later. She also worked for her mom and dad at the former Hurd's Market on East State Street. She was a member of the Thelma Rogers G&H Society.

She married Robert E. Taylor on August 9, 1962, and worked with her husband in his insurance business serving the citizens of Wellsville.  Prior to that, she was married to Elmore Gibson Harkness, MD.

She is survived by her one son: David B. Harkness and his wife Susan R. Harkness, two granddaughters: Lindsay G. Harkness, and Ashley R. Harkness of Edmond, Oklahoma; and two step-sons: Robert R Taylor and Richard L. Taylor and their respective families.  In addition, she is also survived by two nieces and four nephews.  Preceding her in death is her granddaughter, Heather L. Harkness, husband, Robert E. Taylor, her sisters, Arlene and Della and parents, Myron and Pearl Hurd.

She had been a lifetime member of the Christian Temple Church of Wellsville. In consideration of her final wishes, she will be cremated and will not have a formal funeral service. To leave online condolences please visit www.embserfuneralhome.com.