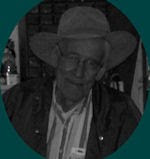 Wellsville, NY - Berwyn J. Hauser, 81, of 2898 Field Street died on Tuesday, September 21, 2010 at the Veterans Administration Hospital in Buffalo. He was born October 11, 1928 at the Tullar Maternity Hospital in Wellsville the son of Carl Frederick and Edna (Waterman) Hauser. He was the life long companion of Shirley Neu who predeceased him on July 1, 2010.

Berwyn was a life long resident of Wellsville with the exception of a few months in Wellsboro, PA where he ran a local taxi service just prior to entering the Air Force. He served as a Military Policeman Officer with United States Air Force during the Korean Conflict. It was during his military service that he was tapped as a "sign painter", which became his primary vocation. Many, if not all of the sign projects proposed, started out as sketches on napkins at the diner or the Texas Hot! He was a 1946 graduate of Wellsville High School and kept a detailed history of class reunions and class mates. The flexibility of this vocation allowed variety and expertise to his work life. He managed the Wellsville Skating Rink and was a bus driver for Wellsville Central School for many years. He owned and operated The Sign Shop in Wellsville from 1970 until his retirement in 1993. He helped organize the Wellsville Blue Devil Drum & Bugle Corps and supported the Modern Diner, Castaways and the Texas Hot in ways to numerous to mention. His tall frame and distinctive hat, his willingness and ability to help whenever and whomever asked, made his presence on Main Street notable. Coffee time anywhere in Wellsville will not be the same.

He is survived by a sister, Kathryn Hauser Genung of San Leandro, CA, two nieces, Marilyn Genung Khalaji of Fremont, CA, Irene "Rene" Genung of Rock Hill, SC, and one nephew, Wayne Genung of Rock Hill, SC as well as several great nieces & nephews. He was predeceased by a brother-in-law, Art Genung, a nephew, Merton Genung and a niece, Nancy Lee.

The family is grateful to the many that have extended condolences. Friends are invited to a celebration of Berwyn's life on Thursday, October 7, 2010 at 2:00 pm in the Monday Club Room at the David A. Howe Public Library, 155 N. Main Street in Wellsville. We hope to hear stories and anticdotes as we gather to fondly remember a man who stood head and shoulders above most and who were so very glad to call him friend. Burial will be in Woodlawn Cemetery. Memorial donations are suggested to the David A. Howe Public Library. To leave online condolences, please visit www.embserfuneralhome.com.
Posted by Dick Helms at 8:49 PM