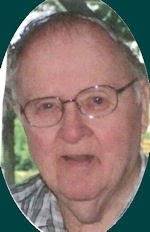 Wellsville - Glen E. Anderson of School Street passed away on Wednesday November 11, 2009 at Jones Memorial Hospital. He was born on May 15, 1923 Ridgway, PA. to Edward S. and Verna C. Starr Anderson. On December 14, 1951 in Wellsville he married Nordica Root who predeceased him on November 5, 1986. He was also predeceased by his significant other of 20 years, Jean MacMurry, on May 24, 2008.

Glen graduated from Ridgway High School in 1941 and later in his life, while raising a family, from Alfred State College. He started working in 1941 for Moore Steam Turbine in Wellsville and enlisted in the US Navy and served from 1942 until 1946 aboard the USS Grapple as a salvage diver. After the war he resumed his employment and retired from Worthington in 1986 after 44 years of service. For 30 years he and his wife raised beef cattle on their farm on Donovan Road. Glen was a former Town Supervisor for the Town of Alma, longtime supporter and past rally chairman as well as fundraising chairman of the Great Wellsville Balloon Rally. Glen was a 10 year Allegany County literacy volunteer who attended the Christian Temple Church. He enjoyed hunting, fishing, woodworking and carpentry. Later in life Glen loved dancing and traveling.

Glen was also predeceased by his two brothers, Kenneth and Ronald Anderson.

Friends are invited to attend a memorial service on Saturday November 14 at 2 PM in the Christian Temple Church on Maple Avenue in Wellsville. Burial will take place in Maple Lawn Cemetery and memorials in Glen’s name maybe made to the Office for the Aging, the Christian Temple Church or to Jones Memorial Hospital. Arrangements are under the direction of the J.W.Embser Sons Funeral Home in Wellsville.
Posted by Dick Helms at 6:12 PM