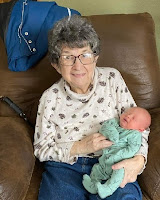 Bev was a life-long resident of Allentown; she was a 1956 graduate of Allentown Union School. She was a bookkeeper for Francis R. Root Inc. Oil Field and Excavation of Allentown; she also helped establish the Fashion Bug of Wellsville and worked there until it’s closing in 2013. Outside of her employment, her work was never done – “Grandma Beetle” was proactive on the family farm by raising beef cattle, participating in horse pulling and riding, while also working the oil leases; but then in turn preparing meals for everyone else. She was fond of cooking, and provided meals for many in several aspects of her life. She assisted with the other family businesses such as: R&W Moto/Ski on Hog Brook (later on White Hill). She was a long-time and tremendously involved member of the Allentown United Methodist Church, she was instrumental in helping to organize the monthly outreach meals, and enjoyed singing at church with her wonderful voice. She served two terms as a board member for the Town of Alma. She will be remembered as a Jill of All Trades.