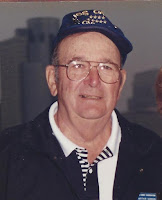 Art left High School to enlist in the U.S. Navy at age 17 during WWII. He was commissioned aboard the USS Cabot, an aircraft carrier, for 3 years. During the war, Art and the USS Cabot were stationed in the South Pacific. He and his ship mates served 405 straight days at sea and they received many honors and metals for their contribution during the war. His ship earned 9 battle stars and had been hit by 2 Japanese kamikaze Aircraft in one engagement. Famed World War II correspondent Ernie Pyle sailed with Cabot for 3 months where Art was able to share time with him. After the war Art was able to attend several Cabot reunions including one in New Orleans, LA., when the USS Cabot was returned to the United States from the country of Spain. Art retired from Air Preheater in 1985 as a Welding Supervisor and enjoyed traveling, hunting, and fishing. He loved to teach others his passion of fishing, hunting, and sports especially to his grandsons, Bryan and Connor. While Art was in high school he and his brothers helped build the family home in Stannards and played high school sports including football where he was elected captain. Art was honored as a graduate of the WHS Class of 2010, receiving his diploma from his fellow classmate and grandson Bryan. Art’s memberships include the Wellsville Elks Lodge #1495, the American Legion Post #702 of Wellsville, the Cabot CVL 28 Association, and the Immaculate Conception Church of Wellsville.

Art was predeceased by his parents, his wife Margaret, his brother Jim Gordon, and his brother in law Larry Irwin.

Friends are invited to call on Sunday, April 23, 2017, at the J.W. Embser Sons Funeral Home from 4 to 7 pm. On Monday a prayer service will be held at 10:30 am in the Funeral Home followed by a Mass of Christian Burial to be celebrated at 11 am in the immaculate Conception Church. Memorials in Art’s name may be made to the Immaculate Conception School or to the charity of the donor’s choice. To leave online condolences please visit www.embserfuneralhome.com.