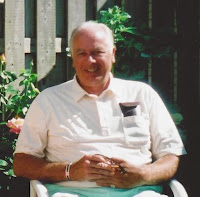 Rick was a graduate of Wellsville Central High School in 1951.  He then attended Alfred State College, and from 1953-1955 served in the Army during the Korean War.  When he completed his tour of duty he was employed at Air Preheater for fourteen years.  He then decided to enter the world of family owned business working for Hyslip and Hyslip Insurance agency which was later purchased by Reidman Agency.  It was after working for Reidman Agency he decided to purchase the Fillmore Insurance Agency which is known now as Walker Insurance Agency where he retired in 1992.
Rick is a life member of the Elks Club, Wellsville American Legion and Past President of the Wellsville Lions Club in Wellsville.  He also served on the Wellsville Town Board for nine years..

Although Wellsville was his home he and Ellie spent every summer at Rushford Lake and fulfilled their dream of owning that trailer park and naming it Rick and Ellie’s Summer Park.  They spent many years traveling in their motor home across the United States and living in it during the winter months in Florida. Rick will fondly be remembered by the court kids as the last man standing.

Anyone who knew Rick knew his love of hunting and his camp on Helmhold Road that he and his sons built from the ground up. The camp location was chosen by Ellie. He would retreat there every afternoon to feed the fish and enjoy the peace and quiet.

It was the mornings at the Texas Hot with his friends in the back booth that he cherished, which included lots of laughing and telling of many stories and tales.  He was also the driver in the fall to the home Alfred University Football games with these same friends who were some of Alfred’s biggest fans.

In addition to his wife Ellie, he was predeceased by his sister Marilyn Ruger and his parents.

Friends are invited to call on Thursday, May 28, 2015, from 2-4 and 7-9 in the J.W. Embser Sons Funeral Home Located at 34 West State Street in Wellsville. Rick’s funeral will be held on Friday at 11 am in the funeral home.  In lieu of flowers memorials in Rick’s name may be made to the Hart Comfort House or the David A Howe Library.  Burial will take place in Woodlawn Cemetery and to leave online condolences please visit www.embserfuneralhome.com.