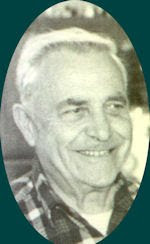 Belmont, NY - Charles L. "Charlie" Strope Jr., 85, of 4 Erie Street passed away on Thursday, December, 16, 2010 at the Wellsville Manor Care Center following a brief illness. He was born February 7, 1925 in Lockwood, NY the son of the late Charles and Helen (Kelley) Strope. On March 3, 1950 in Waverly, NY he married Shirley Morton who survives.
Charlie had been a resident of Belmont for 46 years. He was a 1942 graduate of Van Etten High School and attended Ames College during his military career. He was a veteran of the U.S. Navy, serving from June of 1943 to April of 1946 aboard the USS Harry Lee APA-10 in the Pacific Theater of Operation. He was employed as a Customer Engineer for IBM in Elmira and Buffalo for 30 years, retiring in 1985. Following retirement, he repaired typewriters for several years at the Allegany County Courthouse.

He was and active member of the American Legion for 64 years, most recently with the Herbert W. Delong Post 808 in Belmont, where he was a Past Commander and had served as the Adjutant for over 20 years. He was the County Commander in 1976 and the Chef De Gare for Allegany County 40-8. He was a member of the VFW in Sayre, PA, Wellsville Moose Lodge # 601 and the Wellsville Elks Lodge # 1495. He was a former member of the Belmont Conservation Club and the Cayuta Hose Company in Waverly, NY until 1963.

Friends are invited to call on Sunday from 2:00 to 4:00 and 7:00 to 9:00 pm at the J. W. Embser Sons Funeral Home Inc., 17 Schuyler Street in Belmont. The funeral will be Monday, December 20, 2010 at 11:00 am in the funeral home with Deacon Frank Pasquale presiding. Military honors will follow at the funeral home and burial will be in Lockwood Cemetery at a later date. Memorial donations are suggested to The American Legion Post 808 in Belmont or any charity of the donor's choice. To leave online condolences, please visit www.embserfuneralhome.com.
Posted by Dick Helms at 4:41 PM